Even down a goal early, grandma can’t wipe the smile from her face, and Buddy the beagle hasn’t sat this still in, well, ever. 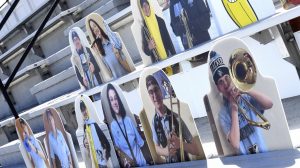 These 2D static onlookers are part of the crowd at Blue Jays lacrosse home games this season, as Johns Hopkins has joined the legion of professional and college teams putting cardboard cutouts of fans — even four-legged ones — in the stands to fill stadiums and be there in spirit on game days.

“Our fans are a huge part of our lacrosse program and the success that we have, and we saw early on in pre-season that it was unlikely that fans were going to be in the stadium,” says Jake Lee, director of marketing and sponsorship for Johns Hopkins Athletics. “So we made this pivot to fan cutouts, which has been a popular phenomenon in the sports industry. This gives our fanbase — students, alumni, parents, family, and friends — who are not able to watch and support the players in person a way to root them on and show their support.”

For $50, fans submitted a photo and purchased a cutout for all men’s and women’s lacrosse games at Homewood Field this season. The purchase included a $25 tax-deductible donation. To date, a few hundred have been sold and are displayed on the home-side of the stadium, fanning out from the middle of the field and within eyeshot of the home bench.

The money raised from the cutout sales goes directly to Johns Hopkins Athletics to support all varsity sport programs. With men’s lacrosse the only ticketed sport, the loss of revenue because of limited fan attendance is significant, says Grant Kelly, senior director of development for Homewood programs.

The cutouts debuted on February 20 for the men’s games and February 21 for women’s lacrosse. In addition to family, the photos have depicted the Blue Jays mascot, Hopkins Pep Band members, and nearly 30 cutouts of dogs.

Read more about the cutouts at the Hub.